The first time Phoenix died she was just six months old. She’d been born too early, her lungs underdeveloped and prone to infections.

Chrysalis didn’t recon babies under six months; it was part of their Spiritual Agreement, drawn up with the Multi-faith Congress, of which Phoenix’s father was a member in his capacity as Unitarian minister for their sector. Phoenix knew that her difficult first six months almost ended her parents’ marriage, as they battled over the ethics of reconning babies younger than the law allowed. Her father’s mantra was “If she dies, of course we will mourn, but it is God’s will.” Her mother—being a physician—always retorted with, “And your very same God gave us the brains and science to challenge his will.

Phoenix envies her brother Gryphon. The daredevil and sports hero has all of his recons left: three more chances at life. But she is left with only one, and learns that her beloved brother is responsible for one of her deaths. When Gryphon himself has an accident, the governing body Chrysalis refuses to recon him, deeming his death to be a suicide. His friends’ code of silence makes it difficult to find out what happened, but Phoenix is determined to unravel the mystery and save her brother.

Winner, Sheila A. Egoff Book Prize, 2010 Honor Book, Canadian Library Association Young Adult Book of the Year 2010
“The Gryphon Project is, in essence, an adventure story, an exciting tale that young readers will easily latch on to… Although the novel is set in a seemingly distant world, readers will relate to the wide range of characters dealing with similar issues to their own: shifting friendships, budding romantic relationships, and the struggle to keep a family together during times of hardship and grief.”
– Quill & Quire

“Part sci-fi, part thriller and part mystery, The Gryphon Project is another heart-stopping novel that will keep readers thinking long beyond completion of the book.”
– Canadian Children’s Book News

“The Gryphon Projectis Carrie Mac’s eighth novel and is deserving of the awards and accolades given to her earlier books. Fans will enjoy the tension and perception of the novel, and these very characteristics, plus a cast of intriguing characters, are bound to attract new enthusiasts as well. Highly Recommended.”
– Canadian Materials Magazine 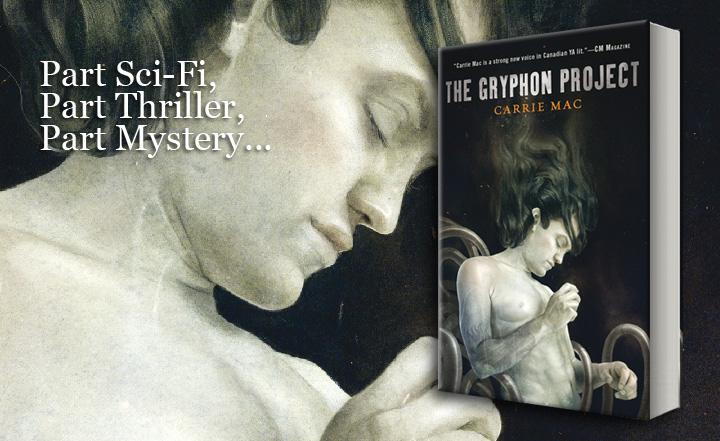 Please Use the link below to Buy the Book: