After the last post and its comments featuring sex and violence and censorship, I decided it was time for some bunnies. Nobody wants to censor bunnies, right? Well, I guess they might, depending on what they’re getting up to.

I have a commissioned illustration in the works (BUNNIES!), and so I sat down yesterday to do some sketching and research, and seeing as so many of you love to hear about the inner workings of an illustration, let’s get started. (BUNNIES!)

The idea behind the playing around was to end up with a new banner for Twitter and Facebook, and some ideas for the custom piece.

1. Research bunnies. Find pictures of real bunnies. Or if you’re in Vancouver, you could also take some carrots and apples to Jericho and wait for sunset and behold the multiplying multitude of bunnies and sketch from life. (BUNNIES!) Oh, maybe I shouldn’t make reference to bunnies procreating? Whatever. Moving on. I did not go to Jericho and sketch from life because it was raining and it was cold, and, well, Google. I remember going to libraries to photocopy pictures way back when. I had binders and binders full of reference pictures. Sometimes I want to hug the Google.

2. Mess around in your sketchbook. Oh, how I despise showing my rough sketches here, but in the name of honesty, behold: 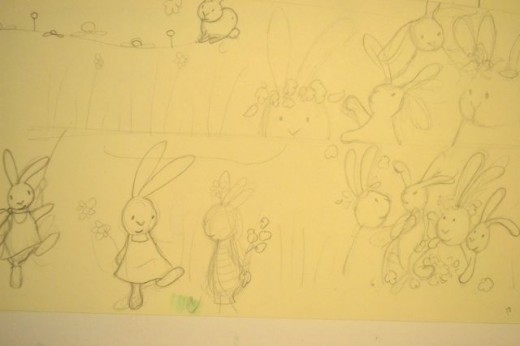 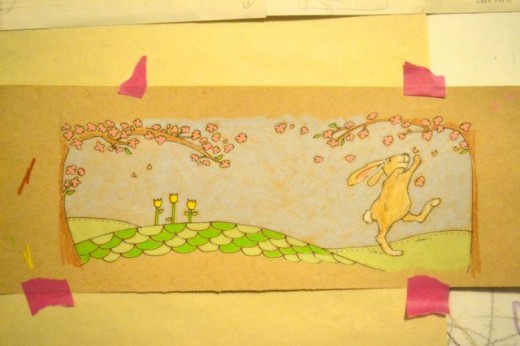 3. Scrap that. Move on. Hello, adorable gender neutral sweetheart bunnies. Watch out for the Giant Zombie of Doom, you cutest things ever. 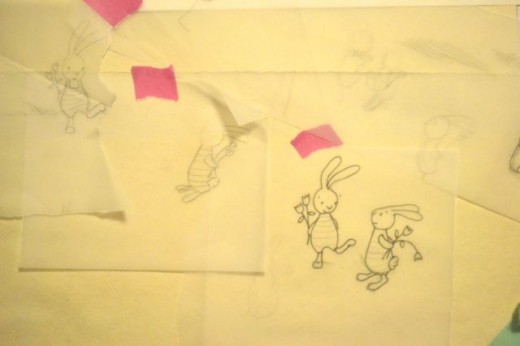 4. Pick your paper, your medium, your layout. Fail again. Can’t stand it. Hate the grass (What the heck with the bumps, already?), hate the jumpers, hate the paper. I can’t stand that paper. It’s too soft and toothy and it is entirely unforgiving. If you make a line and want to erase it, well too bad, the groove will live on, messing everything up and making you think about Photoshop, which is not at all helpful when the end product is going to be an original. 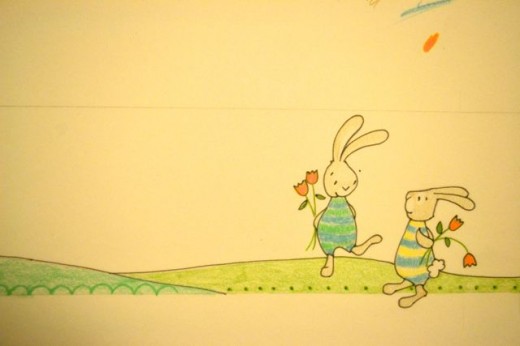 Jack: “What’s wrong with that one?”

Jack: “I like it. It’s way better than the monster rabbit.”

Hawk: “Can you put my safety goggles over my pirate patch, but leave my hardhat on? And this cape won’t fit over my dinosaur costume. Can you make it bigger?”

6. Ah, that’s better. I really do love my Strathmore Toned Tan paper. So, this one will be the banner, and now I know how to move forward on the custom illustration. 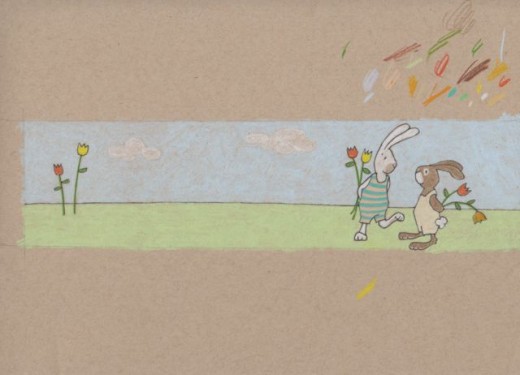